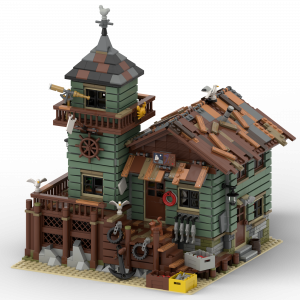 To avoid finishing all the modular buildings by the end of the month, I was aiming for something different – building the iconic Death Star and making fairly decent progress – when Studio decided to die on me and take away 8 hours worth of building work (I swear, I do save, but apparently not enough). Being too uninterested in repeating steps I had just done, I went back to buildings. But I thought I’d aim for some character and attempt a highly-detailed set that has eluded me through a couple of sales and may simply be forever out of budget: the 2057-piece Fishing Store from 2017.

Apart from all the details, this set presented quite a few challenges. Only half of the minifig pieces were present, and there were many custom-printed parts. normally I don’t mind

skipping stickers or rareish prints in these virutal builds, but since one part was used 17 times as a “wood plank”, I thought I’d put in a little more effort. Studio has a companion “Part Designer” app that lets you apply stickers or even design your own parts. I’ve done this a time or two in the past, but trying to find a good image of a printed part (that isn’t rotated and angled for a pleasant viewing angle is tough). Fortunately, LDraw had a version of this brick in review, so I was able to import that without too much trouble. The rest of the prints I skipped or, in the case of the store sign (which should read “Anton’s Bait Shop”) found an alternative. 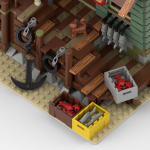 I again enjoyed the challenge of “stuffing” all the parts into boxes – and there were plenty of them this time around! I think the image in the instructions of the flippers lying perfectly even across those boxes is near impossible, but I at least got all the equipment to fit in roughly the same order. The flexible chains were a nightmare; inside the store they were fine-ish, but the loops around the tires were never going to cooperate. In the end, I got them “close enough” and dealt with the collision warning. It still looks decent enough.

I also had to break my rule of following the numbered directions precisely. Partly because Studio’s 1×4 hinge plate doesn’t like to rotate with other pieces unless you separate it, but mostly because I wanted the unit to be slightly functional in its virtual home. Now the two doors on the side can be easily rotated without complicated multi-selection. The other interesting trick of the virtual build was getting the helmets on the upside-down clear heads on the scuba gear. Eventually I figured out I could snap the heads to the jumpers in their final upside-down orientation, then flip them with the keyboard (triggering collision warnings), then snap the helmets on, then flip the heads again. Tricky tricky.

This set is clearly a beautiful art piece that could sit on display nicely, though there are plenty of tools and characters to enable some play. Ultimately this felt like a great use of my virtual-build plan – I certainly smiled at several points at clever details or how something came together or managed to fit just perfectly.